You can jump straight into my past and current research by clicking on your topic of interest – lunar basins, Orientale basin, South Pole-Aitken basin, asteroid survivability, Io – if you do not want to read an introduction to my research.

Basins and their modeling
Basins are the largest form of impact crater, but also the rarest; little is known about their formation or structure. On the Moon, a crater is defined as a basin if it has a diameter >300 km. Basins can also be distinguished from smaller crater structures as they usually contain at least three concentric ring structures (simple craters usually have only one ring; complex craters, two), hence their alternative name – multi-ring basins. There are about 50 basins on the Moon. All of these are thought to have formed 4.4-3.8 billion (or, more scientifically, giga) years ago (Ga). The majority may have formed in an even shorter period of time, 100-200 million years, in a period known as the Lunar Cataclysm (evidence of a high cratering rate at this time is also evident elsewhere in the inner Solar System, and so this event is sometimes referred to as the Late Heavy Bombardment). Following this cataclysm, impact rates on the Moon declined. Compared to those first 700 or so million years, little has changed on the Moon’s surface since then. The Moon is, therefore, the ideal place to study these impact craters due to their relative abundance and preservation.

Impact cratering studies have historically been carried out using laboratory experiments and decametre-kilometre scale explosion (and nuclear) tests. Laboratory experiments can achieve impact velocities of up to 8 km/s, though this well below the average impact velocity on the Earth and Moon (17-18 km/s – about 40,000 mph), but are limited to using impactors up to only a few millimetres in size. Explosion testing produces larger-scale craters in a more realistic environment but are also limited in their size and energy source (nuclear sources can no longer be used). These techniques are, therefore, not ideal when one wants to investigate basin-scale craters. The best technique for this is computer modelling.

I, therefore, investigate basin-scale crater formation using computer modelling. I use a shock physics code called iSALE (these codes are sometimes referred to as hydrocodes as early models did not include strength; all materials were treated as fluids). In simple terms, to model an impact event, the code: solves the equations of mass, momentum, and energy conservation for a flow of continuous media; and makes predictions about the material’s response to deformation based on (1) an equation of state, which accounts for thermodynamic changes (heating) and compressibility (i.e., density changes), and (2) a constitutive strength model, which describes stress resisting deformation. Below you will find brief outlines of my past and current research topics. 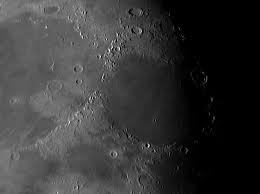 Lunar basins
The Moon is the ideal place to investigate all aspects of impact basins (the rarest impact structures), from their formation to their structure. My colleagues and I, therefore, undertook a study investigating the formation of lunar basins during the proposed lunar cataclysm. We investigated different sizes (40-120 km in diameter) and velocities (10-20 km/s) of impactors and used target conditions estimating the thermal state of the Moon during the proposed lunar cataclysm (it was far hotter than it is today).

We found that the thermal state of the target greatly influenced the basin-forming process: for impacts with identical energies, a larger basin was formed in the hotter target. This is because the hotter target is weaker allowing a larger crater to form. For more detailed information on this study published in Geophysical Research Letters in 2012 click here.

The central peak of Tycho crater, the Moon, protruding from the crater floor. Peak is 15 km across. Image from NASA.

Another study I lead investigated the amount of uplift associated with lunar basin and large crater-forming impacts. During impacts, target material can be excavated out of the crater or displaced within the crater. Displacement can uplift target material towards the surface. This is well known from field studies of terrestrial craters (i.e., the presence of central uplifts – hills or mountains protruding from the crater floor). It is also known that the amount of uplift beneath craters attenuates with depth. However, no studies to date had tried to quantify this attenuation of uplift for large craters and basins.

My colleagues and I produced relatively simple analytical equations that quantified this attenuation of uplift for large lunar craters and basins. The equations can also be used to predict the amount of uplift for a target layer at any depth. This is particularly useful for estimating how close lunar mantle material is to the lunar surface. If lunar mantle material is at a shallow enough depth for sampling (using robots or humans), then analysis of this material would greatly aid our understanding of the formation and structure of both the Moon and Earth. This work is now published here on the Geophysical Research Letters website.
Return to research topic list. 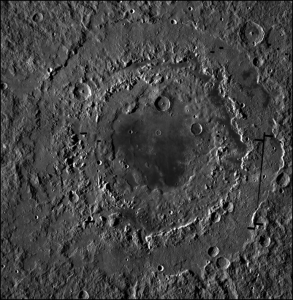 Orientale basin
Orientale basin, located on the western limb of the lunar nearside, is one of the largest (930 km in diameter) and youngest (second-youngest) lunar basins. Its age means it is relatively well-preserved. Orientale has been the archetypal structure for impact basin formation studies. Despite being the subject of numerous works, aspects of the Orientale basin remain uncertain. For example, how did each of its ring structures form? and how much molten rock did the impact produce? My colleagues and I, therefore, undertook a study investigating the formation and structure of Orientale. Our study of Orientale basin has now been published in the Journal of Geophysical Research: Planets and can be found here.
Return to research topic list. 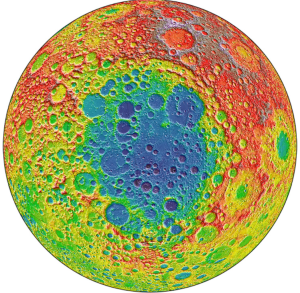 South Pole-Aitken basin
The South Pole-Aitken (SPA) basin is the largest and oldest impact crater on the Moon. It is 2400 km in diameter, and is therefore larger than the radius of the Moon (1740 km), and located on the lunar farside. Though it is the oldest lunar basin, no one is sure just how old it is; it could have formed anywhere between 4.4-3.9 Ga. SPA also has an unusual geology and various locations within it have been put forward as potential landing sites for future lunar missions. My colleagues and I decided to try and constrain the magnitude of the impact – how big was the impactor and how fast was it going? Due to SPA’s possible age, we used a variety of target thermal conditions, starting with those used in our lunar basins study, and then using increasingly hotter temperature gradients (the Moon was hotter still in its infancy; it is thought a magma ocean covered the surface of the Moon after its formation). By constraining our results to a variety of satellite and probe data (spectroscopic data, gravity data etc.) we found that the SPA impact was likely caused by an impactor 170 km in diameter, travelling at 10 km/s into a very hot (50 K/km temperature gradient) target. This research was featured here on the NASA Lunar Science Institute website. More information on this study, published in Icarus, can be found here.
Return to research topic list.

Drillcore from below the Morokweng crater showing the top and bottom contacts of meteoritic material. From Maier et al. (2006) Nature.

Asteroid Survivability
As well as the formation of impact craters, I have also investigated the fate (or survivability) of impacting asteroids. Fragments of impacting asteroids have been discovered here on Earth, though these are most often associated with small-scale (10s of metres or smaller) impactors. Evidence form larger impactors is seldom, even though little of a large-scale asteroid will completely vaporize on impact. Recently though, unmolten fragments of asteroidal material from a large-scale impact was discovered for first time within the 80 (possibly up to 240) km diameter Morokweng crater in South Africa. Analysis of the crater material showed the amount of asteroidal material present was exceptionally high compared to other terrestrial craters. What could have been the cause of this?

My colleague and I decided to investigate a number of impact variables (impactor shape, porosity, velocity, impact angle, and target density) to see if any of them resulted in unusually large amounts of the impactor remaining solid during the crater-forming process. Our most interesting finding was that impactor shape had a significant affect on survivability. Compared to a spherical impactor, a prolate-shaped impactor (think of a rugby ball with the pointy ends pointing up and down) survived far more; the prolate-shaped impactor also survived far more than an oblate-shaped impactor (a rugby ball with the pointy ends pointing side-to-side). We also produced a relatively simple equation that allows the amount of impactor material surviving for a given set of impact conditions to be estimated.

Part of this work was featured on the American Geophysical Union Fall Meeting 2012 blogosphere. This work is published online in the journal Meteoritics and Planetary Science. Click here for more information on this study.
Return to research topic list.

Io
During 2012, I participated in the NASA Planetary Science Summer School at the Jet Propulsion Laboratory (JPL), Pasadena, CA. I was one of 15 people selected to plan and design a planetary mission concept with the help of JPL’s Team X. From a list of four options, we chose to plan and design an Io observer mission, which we christened FIRE (Flyby of Io with Repeat Encounters). 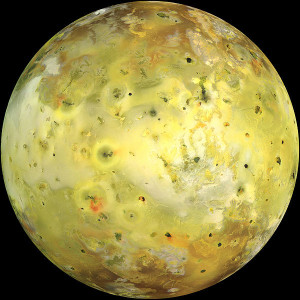 Io captured from the Galileo spacecraft. Image from NASA.

Io is the innermost of the Galilean moons of Jupiter. It has a diameter of approximately 3600 km (comparable to Earth’s Moon) and is the most volcanically active body in the Solar System. Io could not be more far away from my main research as, due to its constantly changing surface (a result of volcanic activity), it is the only rocky body in the Solar System which contains no evidence of impact craters! Volcanism is a key geological process; Io, therefore, represents an ideal laboratory to improve our understanding of volcanic processes, especially as conditions on Io today could have been present on other rocky planetary bodies, such as the Earth, billions of years ago.

Our mission objectives were split into two categories: Io’s interior and Io’s surface processes. We designed four instruments for our spacecraft that would help us achieve our objectives. We presented our work at an international workshop on instrumentation for planetary missions and at the American Geophysical Union Fall Meeting in 2012, and at the Lunar and Planetary Science Conference in 2013.
Return to research topic list.